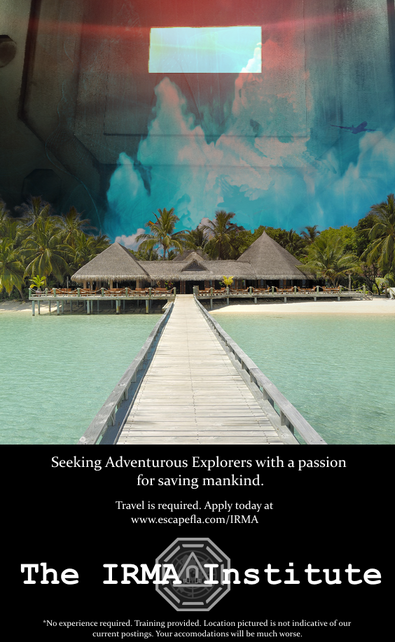 ​      Since the late 60's, The Institute for Research of Magnetic Anomalies (IRMA) has lured adventure seekers with the portrayal of a global adventure.  Very little is know about the organization itself or what it is that they actually do at IRMA. In their most recent recruiting flyer (see insert), IRMA is claiming they have something to do with the "saving mankind". What that actually means, no one seems to be able to or willing to answer. They also give the impression that recruits will be heading off to some glamorous island location. The fine print in the advertisement itself indicates that is most likely not the case.

While speaking with Walt Dawson, VP of Recruiting, he refused to give any additional details on what might be in the immediate future for the new recruits. Mr. Dawson did say that IRMA turns down thousands of applicants each year which begs the question, why are they always hiring? Dawson simply responded by saying: "Most people are not qualified." What are the qualifications, I asked. Dawson said that IRMA does not disclose their hiring qualifications to anyone, even to potential recruits.

For an organization surrounded by mystery, Dawson did nothing other than add more questions to the growing list. In more than 50 years of operation, no employee, former employee or applicant of IRMA has ever come forward to shed light on what exactly goes on there. In fact, aside from Mr. Dawson, current and former employees along with of IRMA are impossible to find. We have also been unable to locate anyone who has made it through any part of the recruitment process, yet they hire hundreds of "recruits" each year?

To make this situation even more mysterious and intriguing, IRMA has contracted Escape FLA escape rooms in Largo, Florida as this recruiting rounds testing facility. When I made contact with Escape FLA about their involvement with IRMA, they stated that were not able to comment on that matter. They did provide a link for interested recruits to schedule a testing and evaluation session. Clicking the link below and sign up for "The Hatch" beginning March 17th.

As new IRMA Institute Recruits, you have been dispatched to the A.P.E. Station. The station was recently abandoned and the control systems have been sabotaged. Gain access to the control center, re-establish control of the Station and replace the fuel cells in the Magnetic Anomaly Containment System (M.A.C.S.) before the Earth's poles reverse and cause global devastation.

This game is for experienced players. If you've never played and escape room before, we suggest you try Vegas Hangover or Operation BlackStone first.

If you're under eighteen (18) years old, a parent or legal guardian must also sign your waiver. You can download a copy below, have them sign it  and bring it with you.
Book Now